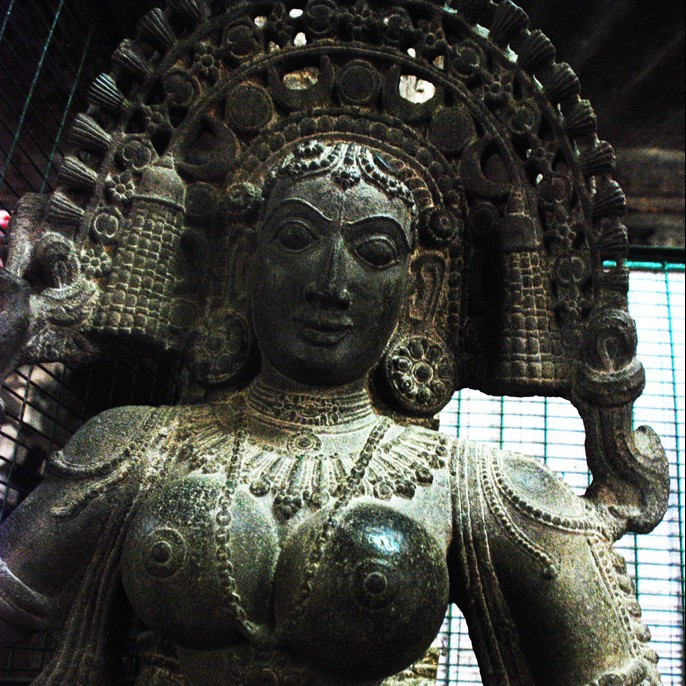 We have heard a lot about “Avudaiyarkoil”  from many people around. Sculptors from Tamil Nadu used to have the sculptures of this temple as a bench mark.  We frequent Devakottai very often, and on one such trip, we had a leisure morning, that made us decide. Now getting the route map… we checked with the locals there, apparently there were 3 routes to reach the location. One was a NH 210 which was the longest, approximately 66 kms. Another one was a SH  28 which was around 57 kms. We decided to take the shortest route, a mimisal road which was about 41 kms. We thought this was brilliant decision.

As usual, the decision proved to be disastrous.  The entire 41 km stretch was a single track road; I think the last repair done by the highway department was before Indian independence. After the initial 15 kms, somehow we started enjoying it. Rural India, has its own charm. Villages, people, cattles running around changed the ambience. Stopped at a small local roadside shop, had a “Nannari Sarbat”, which recalled all our childhood memories…

After 1½ hour journey, we finally reached Avudaiyarkovil. A small town, with some hotels and shops around the temple. From outside, it didn’t give any major expectations to us. But, the temple’s wooden car (ther) with voluminous carvings in it welcomed us at the entrance.

As we entered the temple, the stone sculptures made us speechless…

2 mins……… Before, entering the temple, let us try to know some history and importance of the temple.

Avuadaiyarkoil was known as Thiruperunthurai in olden days and was a part of Pandiya Kingdom. Though the temple name is Athmananda Swamy Temple, it is majorly called as Avuadiyarkoil, by the name of the village. If you can recall the story of Manikkavachagar, one of the 63 Nayanmars (Saiva Saints), he was the one who went to seashore to purchase horses for his king from the Arabs; but on the way, Lord Shiva appeared and asked Manikkavachagar to build a temple for him at Thiruperunthurai.  Athmanandaswamy Temple in Avudaiyarkoil is the one which was built by Manikkavachagar.

Avudaiyarkoil is a temple where Aruvam (No statue / idol – formless) is worshipped.  There is no Lingam here, but only the base (avudaiyar).  Similarly, there is no idol for the Goddess, but only a Lotus.  The Lotus Feet of the Goddess is worshipped through a window.  The Reality is formless !!  There is no separate navagraha sannathi in this temple. There is no Nandi in front of the Lord here;  There is neither a kodimaram (Flagpost) nor a balipeedam; no chandikeshwarar either!

The way of doing ‘neivedyam’  is also unique here. I have not seen this kind anywhere else.  There is a platform in front of the Avudaiyar and the priest spreads hot boiled rice, Greens and bittergourd without salt. The steam that comes from these is the offering to the Lord.

Now, back to the life-size sculptures!!

The temple has many beautiful stone statues, stone chains, Mandapam and many more.

The Temple contains exquisitely carved figures in the stone pillars. The larger monolith figures of Agni and Agora Veerabadras at the entrance is awesome. The highlight of this temple is the Kuravan and Kurathi” . They exhibit the excellence of the artists for intricate details from toe to hair style. (from the number of hairs to the veins)

The ceilings are decorated with flowery patterns and stone chain links. There is an architectural description of 27 constellations and more ornate bursting sculptures that are breath-taking.

Lord Ganesha’s Shrine is constructed in such a way that the rays of the Sun fall on the Lord all through the year !

There are lot of comic strip styled Fresco Paintings. From the writings on these paintings, it can be judged as Nayak period – 300 to 400 years old…. (A wild guess!)

Other than festival days, only art lovers and foreigners visit this temple other than the locals of the village. Not much of crowd… And that may be a reason why, the temple and the sculptures still exist intact.

But, from a photographer point of view, he will be pulled back by the bad lighting within the temple and also the fencing around each sculpture…. We have tried to give you the best…. though, the best way is watch through one’s own EYE!

We reached Aranthangi which is 14 kms from Avudaiyarkoil and from there we reached Pudukkottai for lunch.  From thereon, with no break, reached Bangalore at about 8.30 pm.